(CNN)Former president George H.W. Bush has responded after an actress alleged that he touched her inappropriately while he was sitting in his wheelchair during a photo op that took place a few years ago.

In a now deleted Instagram post published on her verified account Tuesday, actress Heather Lind wrote that she was “disturbed today by a photo I saw of President Barack Obama shaking hands with George H. W. Bush in a gathering of ex-presidents organising aid to states and territories damaged by recent hurricanes.”
“I found it disturbing because I recognize the respect ex-presidents are given for having served,” Lind wrote. “And I feel pride and reverence toward many of the men in the photo.”
Lind did not mention the name of the event where the alleged touching took place, nor did she specify in her post the manner in which she was touched. She said in her caption that she was there with the Bushes to promote a TV show. 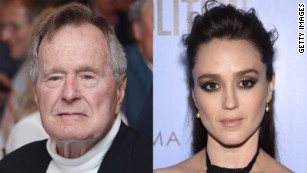 “But when I got the chance to meet George H. W. Bush four years ago to promote a historical television show I was working on, he sexually assaulted me while I was posing for a similar photo,” the post went on to say. “He didn’t shake my hand. He touched me from behind from his wheelchair with his wife Barbara Bush by his side. He told me a dirty joke. And then, all the while being photographed, touched me again.”
The former president’s spokesman Jim McGrath issued a statement to CNN Wednesday about the allegation.
“President Bush would never — under any circumstance — intentionally cause anyone distress, and he most sincerely apologizes if his attempt at humor offended Ms. Lind,” the statement said.
McGrath issued a second statement later Wednesday to provide context.
“At age 93, President Bush has been confined to a wheelchair for roughly five years, so his arm falls on the lower waist of people with whom he takes pictures,” McGrath said. “To try to put people at ease, the president routinely tells the same joke — and on occasion, he has patted women’s rears in what he intended to be a good-natured manner. Some have seen it as innocent; others clearly view it as inappropriate. To anyone he has offended, President Bush apologizes most sincerely.”
The internet was quick to circulate a picture of Bush and wife Barbara, both of whom appear in the photo flanked by a group of actors featured in the TV series, “TURN: Washington’s Spies.” Lind, an actress on the show, is seen standing to the left of Bush in the photo.
CNN has reached out to Lind to confirm that the image being circulated is the one she was referencing and to ask why the post was deleted. Lind has not responded to CNN’s request for comment.
The photo appears on AMC’s official site, with a caption that indicates it was taken at a private screening for the show hosted by the Bushes.

The allegation comes in the wake of the scandal surrounding Hollywood mogul Harvey Weinstein, director James Toback and other men being accused of harassing and assaulting women. Weinstein, through a spokesperson, has “unequivocally” denied “any allegations of non-consensual sex.” Toback denied the allegations to the Los Angeles Times, which was the first to report about women coming forward.
Women worldwide have been using #MeToo on social media to share stories of their own experience with sexual harassment and assault.
Lind said her fellow cast members and producers were aware of what happened and were supportive after the alleged incident.
“I am grateful for the bravery of other women who have spoken up and written about their experiences,” she said. “And I thank President Barack Obama for the gesture of respect he made toward George H. W. Bush for the sake of our country, but I do not respect him. #metoo.”
#MeToo was started more than a decade ago by activist Tarana Burke and received renewed attention after actress Alyssa Milano asked women in a tweet to respond, “me too” if they had been harassed or assaulted in the past.