(CNN)Yemeni rebels on Saturday targeted an airport in Saudi Arabia’s capital with a ballistic missile, according to Yemen’s Houthi-controlled Defense Ministry.

But the missile was intercepted over northeast Riyadh, the Saudi Ministry of Defense said in a statement carried on government-backed Al-Arabiya television.
Yemen’s Defense Ministry said the missile attack “shook the Saudi capital” and the operation was successful. The attack was conducted using a Yemeni-made, long-range missile called the Burqan 2H, it said. 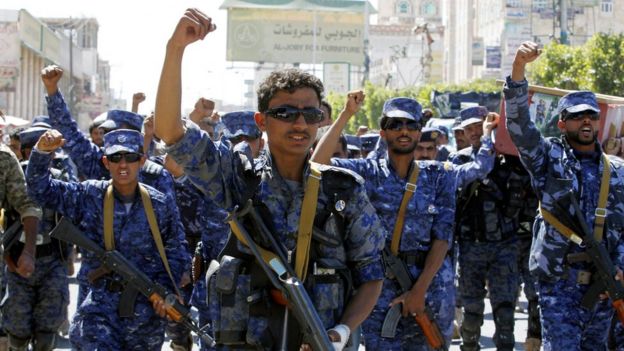 The Riyadh airport tweeted that it hadn’t been affected.
“Travelers across King Khalid international airport in Riyadh, we assure you that the movement is going on as normal and usual, and trips going according to time,” the airport said on Twitter.
Airstrikes later in the day targeted Yemen’s capital Sanaa, shaking homes and breaking windows. This is the first night attack on Sanaa in weeks, according to CNN’s Hakim al-Masmari from Sanaa.
Saudi Arabia has been leading a coalition of states against the Iran-backed Houthi rebels, who toppled Yemen’s internationally recognized government in 2015.
The missile launch on King Khalid International Airport in Riyadh was the first time the heart of the Saudi capital has been attacked and represents a major escalation of the ongoing war in the region.

The Saudi-led coalition accused a regional state of providing material support to the Houthi rebels, saying the firing of a ballistic missile at Riyadh “threatens the security of the Kingdom and regional and international security,” according to a statement carried by Saudi state-TV al-Ekbariya.
The coalition didn’t name the country. Saudi Arabia has been fighting a proxy war in Yemen against Iran, which it accuses of arming the Houthi rebels. Saudi Arabia has led a military operation in Yemen in support of the internationally recognized government, which was driven out of the capital by the Shiite Houthi rebels and is now based in the southern city of Aden.
“This hostile and random act by the Houthis proves that one of the terrorism-supporting countries in the region supports the Houthis,” the statement said.
The missile was fired at 8:07 p.m. local time (1:07 p.m. ET) and targeted civilian areas in Riyadh, the coalition said. It was intercepted by the Patriot missile defense system, leading to shrapnel falling over an uninhabited area east of the airport, the statement said.
There were no injuries, it said.
US President Donald Trump praised the US-made Patriot missile defense system.
“We make the best military equipment in the world,” he said. “… You saw the missile that went out? And our system knocked the missile out of the air. That’s how good we are. Nobody makes what we make, and now we’re selling it all over the world,” Trump told reporters Sunday aboard Air Force One en route to Japan. 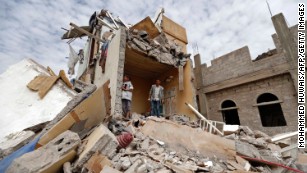 Saudi Arabia calls deadly strike on Yemeni civilians a ‘mistake’
The UN Human Rights Office has documented 13,829 civilian casualties in Yemen, including 5,110 people killed, from the beginning of the fighting into late August.
An airstrike in Sanaa in August destroyed two residential buildings, which a spokesman for the Saudi-led coalition said was an “unintentional accident.” An airstrike days earlier destroyed a hotel on the outskirts of Sanaa, leaving dozens dead.
“We previously warned that capitals of countries attacking Yemen will not be safe from our ballistic missiles,” Houthi spokesman Mohammed AbdulSalam said. “Today’s missile attack comes in response to Saudi killing innocent Yemeni civilians.”
A senior Yemeni air force official told CNN that the claim that Saudi Arabia intercepted the ballistic missile is false.
“The Saudi regime cannot hide the heavy fires that was seen by thousands of Saudi nationals in the King Khalid Airport premises as result of the Yemeni missile,” the official said.
“This is not the end. Saudi cities will be a continuous target. We are entering a new phase,” he said.

CNN’s Bijan Hosseini and Jeremy Diamond contributed to this report.