WHERE ARE WE HEADING? Trump Tweets Mention His ‘Complete Power’ To Pardon & Bemoan ‘Leaks’ WHERE ARE WE HEADING?
THE US ELECTION – RUSSIA INVESTIGATION TEAM MUST BE CLOSING ON SOMETHING WE DON’T KNOW…Just saying…

But from the president frequent tweets or what many infer “panic tweets” at odd hour can only suggest otherwise; and yet, we don’t know all. Except the ‘drip drip drip of information which the White House and the president himself called “Leaks.” 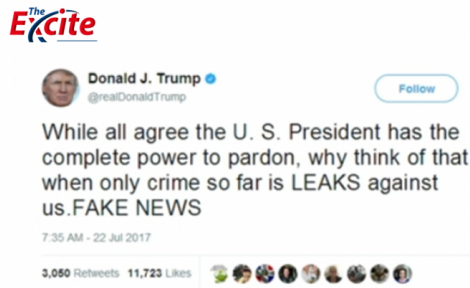 President Donald Trump mentioned his presidential pardoning powers and condemned intelligence leaks in a string of tweets Saturday morning, a day after The Washington Post reported that Attorney General Jeff Sessions spoke about the Trump campaign in meetings with the Russian ambassador last year.